I’ve always wanted to visit Queensland’s Gem Fields. The name of the town called Emerald always fascinated me. Somehow pictured in my mind was a scene out the American Wild West. Rugged men flashing gold capped teeth with a swagger that would rival President Obama’s.

There are a number of towns located in and around the Gem Fields. Sapphire is my favourite gem and the town of Sapphire my chosen destination. Oh, did I mention I was the navigator? MM (My Man) said “Just work out where we are going and I’ll drive”.

We left Bagara Beach and pointed north towards Rockhamption then leaving the A1 we took the A4 Capricorn Highway west, stopping in the town of Dingo for the night. We spent the evening around a fire pit with strangers, telling fascinating stories. Come bed time I felt I’d known my new friends all my life.

In 1973, a population of Bridled nail-tail wallabies  was found in the Dingo area by a fencing contractor. Until this sighting the species was thought to be extinct having not been seen since 1937. The area where the wallabies were rediscovered was protected as Taunton National Park.

We arrived in Emerald around lunch time the following day stopping at a shopping centre for supplies. I didn’t see any gold capped teeth but I did see a lot of tattoos on the blokes and the sheilas and they all had a nice swagger. Must be all them gems in their pockets.

We set up camp that afternoon at the Sapphire Caravan Park  and spent the next 4 days enjoying our surroundings. The park is not too shabby and was mostly empty. We arrived at the beginning of the season. Any sooner and it’s too hot to scratch yourself let alone pick through rocks in the scorching sun. 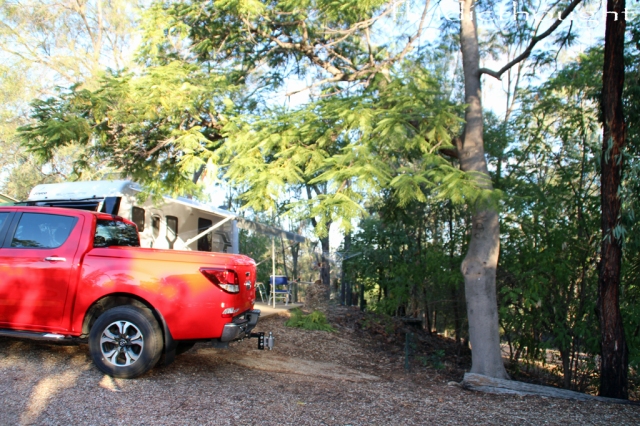 I wanted to take a day trip with a local guide and do some fossicking but I was not quite healed enough to spend the day bent over picking up rocks and shovelling dirt. We did enjoy wandering around the bush where we came across some abandon vehicles. Apparently there are many abandon camps and vehicles that prospectors have left behind scattered all through the area.

As this trip is more of a reconnaissance trip, I marked this place as one to revisit and we set off for the next stop.   More to come…..

Random posts and photographs of life, travel and stuff.
View all posts by fluidicthought →
This entry was posted in Australia, Photography, Travel and tagged Australia, Gem Fields, Queensland. Bookmark the permalink.