Now, where were we up to? The shower screen is in and the bathroom completed. 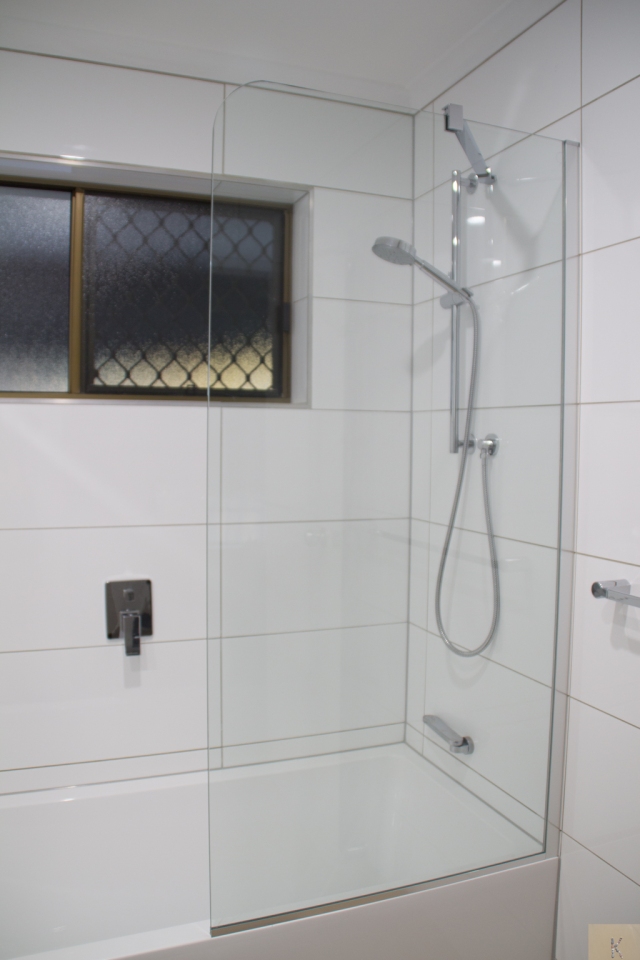 The Kitchen is finally finished. We have been waiting for the delivery and installation of the kitchen bench top and glass splash-back so MM could finish installing the dishwasher, oven, hob and range-hood. We have purchased Westinghouse products.

The company we went through, PazStone in Brendal, have been totally hopeless. When we ordered the bench top and splash-back we submitted out plans to the company and they had their own tradesman come out and re-check our measurements. When they came out to install they had messed up the bench top and the glass splash-back measurements so the installers left and said they would need to re-order and re-cut the stone and glass and someone from the company would be in contact to let us know when they would be back.

2 weeks on and I still had not heard back from the company even after sending 2 emails. I also phoned a number of times but was told the person I needed to speak with was not available and they would call me back. I never received a call.

I called a 3rd time and was advised the bench top would be installed the next day and the splash-back – some time in the future. It’s all be put together now but the mess the installers left has had me, for the past 3 days, removing silicon that was smeared all over the stone. There is also a half-inch gash in the side of our fridge where they hit it with the corner of the glass splash-back when they were moving it through the kitchen.

I’m happy with the end result.

We have used the clipsal brand for the power points and light switches. I love this power point with the USB charger at the breakfast bar.

I’ve also had solar panels installed taking advantage of Origin’s interest free, 2 year payment plan and current government rebates. There are 10 panels on the western facing roof and another 10 on the northern side. I had some palm trees shading the roof area so we have removed them and while we were at it, had a big yard clean up.

Due to the hold up with the kitchen, we had to postpone the tiler who was booked to finish off tiling the house. He’s moved onto another job now so we have to wait for him to finish that before he can do ours.  We don’t want to move the furniture into the living areas until the floors are finished so we are still eating meals from an outdoor setting in the pergola area (brrrr cold) and watching TV in the bedroom.

It’s been a huge job and what with moving ourselves, clearing out Dad’s place and working on the house, my body is starting to protest. I’ve got tennis elbow so badly at the moment, I can hardly pick up a cup of coffee.

The next job on our list is to paint the other two bedrooms which will complete the painting and fully renovate the en-suite. We will then start on the outside. Pulling down one side of the old timber paling fence, replace it with new, pull down the old garden shed and build in the side of the yard between the house and fence to use as a storage area for garden tools, push bikes etc and which will be big enough to store a trailer in. We also need to put up a front fence and lay down a second driveway.

We will need a holiday by the time we are finished but I doubt there will be any money left and I’ll need to start thinking about finding a job soon.

8 Responses to The House Renovations