Labour Day (Labor Day in the United States) is an annual holiday to celebrate the achievements of workers. Labour Day has its origins in the labour union movement, specifically the eight-hour day movement, which advocated eight hours for work, eight hours for recreation, and eight hours for rest.
In Australia, the Labour Day public holiday is fixed by the various state and territory governments. It is the first Monday in October in the Australian Capital Territory, New South Wales, South Australia and, since 2013, Queensland.
The first march for an eight-hour day by the labour movement occurred in Melbourne on 21 April 1856. On this day stonemasons and building workers on building sites around Melbourne stopped work and marched from the University of Melbourne to Parliament House to achieve an eight-hour day. Their direct action protest was a success, and they are noted as being among the first organised workers in the world to achieve an 8-hour day, with no loss of pay. (Ref Wikipedia)
If you look closely you may spot the numbers 888 on many union buildings across Australia. Do you know why?

I left town and spent some time at my friends. I came across a mob of kangaroos when I was walking in the bush.

The weather was just too perfect not to take advantage of and spend a night around the fire. 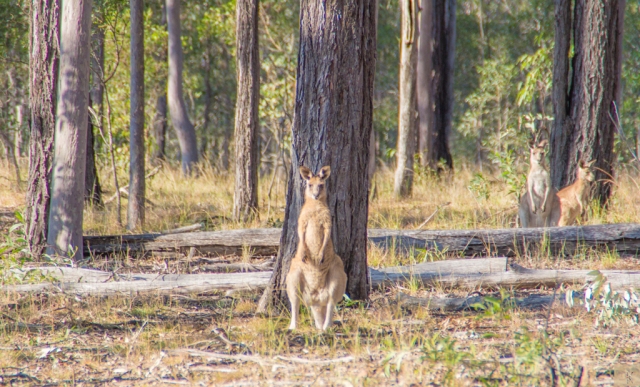